This is a sub-tutorial of Tutorials/Surviving first car: Luxury brand focusing on the engine selection process for your first Luxury car in 1946.

Luxury/Premium buyers want smooth, quiet and prestigious engines, while power and fuel consumption doesn’t matter that much. In particular it means:

That gives us a couple of options.

That would be my first choice. Inline-6 will be very smooth, while still relatively cheap to produce and engineer. As in Premium/Luxury markets we are going for the largest bodies, longitudinally mounted rear wheel drive setup, the extra length of the engine doesn't bother us. I would highlight two different approaches.

As we do not need high revving engine, Direct Acting OHC or OHV would be a good choice. Both would be cheap to produce and quick to engineer. The saved engineering time can be spent on optimising the production process or tooling to bring the unit cost down. This will play well with narrow diameter exhaust for optimised low end torque.

Here is an example 3.0 litters Direct Acting OHC engine that I built for the tutorial. 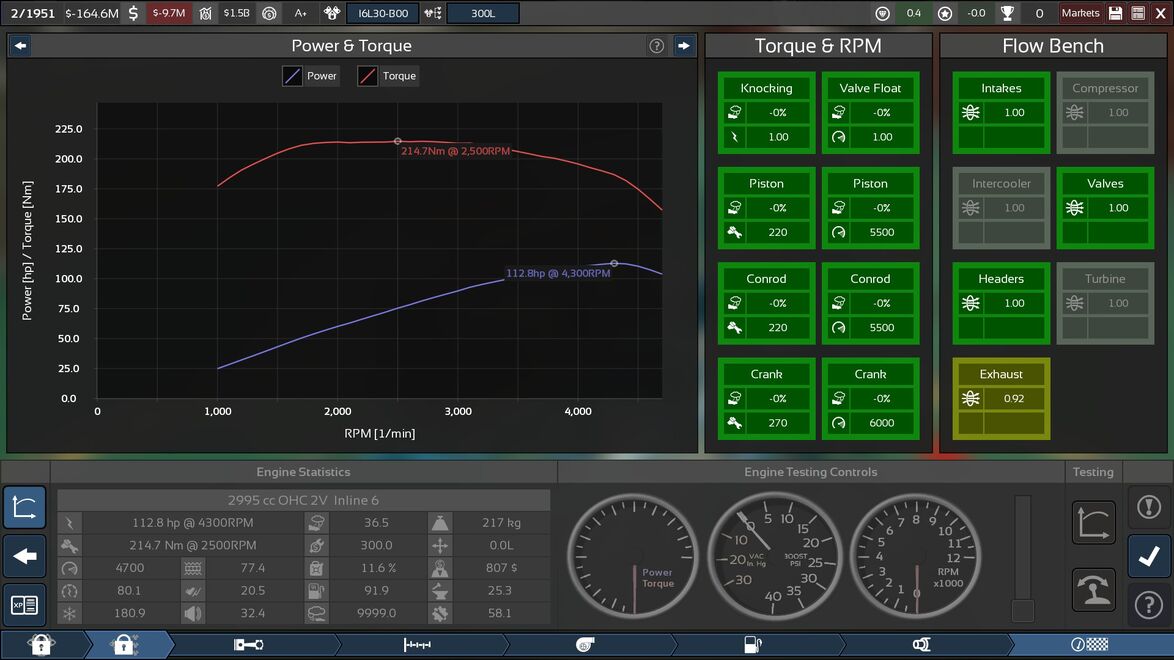 Alternative approach would be to start from the beginning with an advanced engine that you will be able to use until the modern era - DOHC with 4 valves per cylinder. This option has an additional advantage of being a possibility to develop a high revving variant for some sport cars. However the drawback will be the higher unit cost. 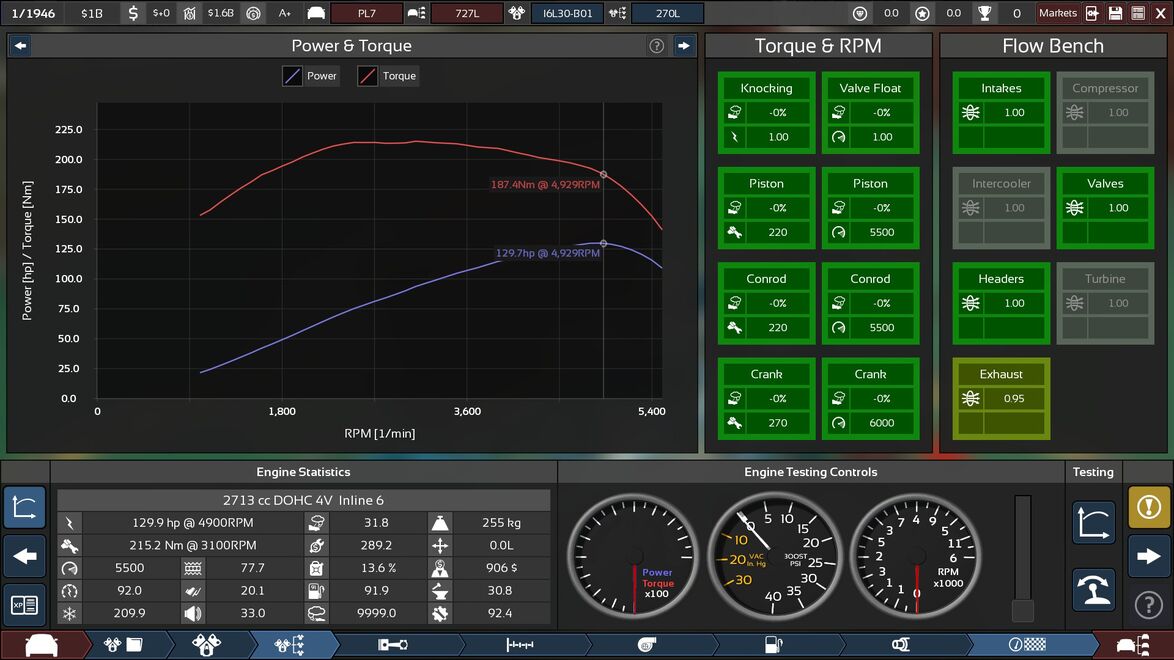 In this design I went for a square 3.0 litre family DOHC with 4 valves per cylinder. As I had problems with pistons and conrods reliability, I decided to decrease the variant's capacity to 2713cc. Once technology improves over time, I would be able to use full capacity of the engine block.

If you have some dilemma about what engine to use in the project, a good idea is to use Sales Forecast to compare the options. Sales Forecast takes into account production and engineering choices as well, so it's a better and more accurate tool as opposed to plain engine comparisons in the engine designer. Here I designed two trims of the same car using two different engines (the above mentioned Direct Acting OHC and DOHC) and I have set up the engineering and engine factories for both of the engines. Keep in mind that until you sign off the project, you can add and remove factories without any costs.

As you can see, Direct Acting OHC is not only cheaper by over $1k, but can score better. The difference of $1k doesn't sound like a lot, but when producing 1000 units a month, it can adds up to $96M-$120M over the lifespan of the model. This price difference makes it quite hard to justify going for the more advanced engine in this case, as you can easily engineer a second more advanced engine later for the saved money. Later on comparison may sway the other way if you would be able to re-use the DOHC engine family in more cars and saving costs by building it in a larger factory.

V12 will have one undeniable advantage: high prestige. This alone can bump the score of your car for the Luxury market by 20 to 30 points. However this will come at a price of losing the Premium market due to lower affordability. For a small company without market awareness it will be probably hard to justify going for such a specialized build at first.

A solution might be going initially for a cheap Inline-6 and plan to eventually move up the market with a dedicated Luxury trim using V12 in the future. For this a nice trick is to start engineering an experimental (without assigned an engine factory) V12 engine in the background to save up on the development costs (lowering funding).

If you decide to go this direction, early on you will be heavily traction limited by the tyres, so keep the power low.

V8 could be made relatively cheaply. This option makes more sense if you are more planning to expand into American style big V8 markets.

Don’t feel obliged to reuse your engines across all of your models. If you want to have V12, V8 H6 and I6 in your line up at the same time for some reason, feel free to do so. Your efficiency will hurt a bit and the costs will go up, but it can be made to work. The main purpose of this tutorial was to show how you can think about selecting an engine design and how it can affect the final outcome. Often the most advanced option is not the best. Keep experimenting and have fun :)